In March of 2014, NationaLease announced the winners of its Masters Club Award competition that recognizes outstanding sales representatives in the organization of full service truck leasing companies. The competition offers salespeople the opportunity to prove just how valuable they are, while giving NationaLease a chance to recognize their hard work.

The coveted award is based on a competitive point system with credits given for each piece of equipment the individual salesperson signs the previous year. This year’s winner, Lacy Teague of Salem NationaLease, received the top honor, the Gene Scoggins Award. This is Teague’s second win. Dean Vicha, President of NationaLease, presented the awards at the gathering of winners at the Hyatt Ziva Los Cabos in Mexico.

“We are immensely proud of the members of this group. Their constant dedication to servicing their customers while representing NationaLease is being justly rewarded at this special event,” said Vicha. 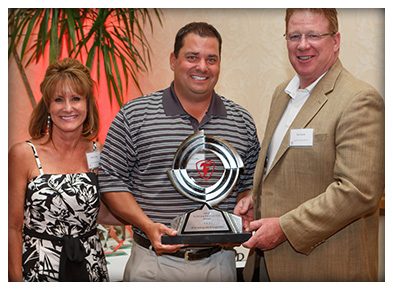 David Gurska, senior vice president of business development at Aim Integrated, recently accepted the award at a Firestone banquet. “This confirms that we’re on the right track with our focus toward partnership and our goal of becoming fully integrated with our customers,” Gurska said.

Aim began serving Firestone’s insulation division in late 2010 and later added work with its metals division. A key to receiving the award, David said, was helping Firestone transition smoothly from a private fleet to a dedicated fleet. “Our operations team really stepped up during the initial start-up,” Gurska said. “That was a defining moment for our relationship.”

The Supplier Excellence Award recognizes “critical partners in their support of Firestone,” said Beth Crider, division manager of logistics at Firestone. Every company that serves as a vendor to Firestone was up for consideration. “This is a distinguished award that we give based on a very high level of performance,” Beth said.

When David attended Firestone’s vendor appreciation golf outing and awards dinner, he did not know in advance about the award. “I had no idea until they called my name,” he said. “It was a total surprise.”

The Firestone award now sits in the conference room at the corporate office to remind Aim employees that customers appreciate good work and good service. The fact that only three Firestone suppliers in the world received the award makes it highly appreciated, David said. “This was something special,” he said. He believes other global companies like Firestone are starting to see the benefits of partnering with a company like Aim.

“We build our transportation model to the customer’s specification,” Gurska said. “We do not bring our spec to the table and try to fit a customer into it.”