The 13-member class comprises individuals with diverse backgrounds who are located across Aim’s national geographic footprint.

Chris DiSantis, Aim Director of Training: “Good Diesel mechanics are difficult to find, and it can be a challenge to recruit them into our industry. Not only is our business in a growth mode, but we need to replace our retiring technicians.”

“This year’s class includes a fine group of young men ranging from college age to mid-30s; from those recently graduating high school to others who are transitioning into new careers,” Chris says. “It’s truly a program that can work for virtually anyone with the technical acumen and desire to be successful.”

George Metzger, Warranty Manger: “This certification is well recognized by the industry and by our customers. Employees who achieve ASE certification also qualify for pay raises.”

As we continued our commitment to company growth and employee development in 2014 we anticipate an increase of more than 10% or higher in ASE certifications. 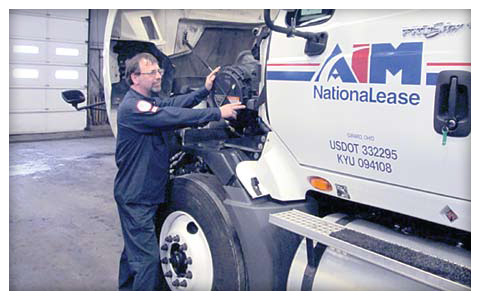 Robert Mrzyglod, two time Golden Wrench winner: “I was surprised when I won it in 2010 and I’m surprised that I’ve won it for 2012. I didn’t think I’d get picked again.”

The Golden Wrench is a prestigious award given to some of the most accomplished mechanics in the industry by NTCS. The competition recognizes heavy vehicle technicians in New York State. Candidates for the award must be New York State residents who have worked as heavy vehicle technicians for their employer for the last two years, have a job attendance record of fewer than two days of unexcused absences and have an accident-free workplace record for that entire year.

Justin Torgerson, a five year employee who graduated from Aim’s in-house apprentice program, has also received a certificate honoring him for his “strong work ethic and dedication” to the profession and community.

“The training here is tremendous and you get to work hands-on,” Torgerson said. “I love my work and it’s fun.”

“I think this says a lot because they don’t just give these awards to anybody. To win this is a big honor.”

Tom Fleming, Chairman CEO of Aim companies also wanted to congratulate his team for their wins. “Each year the original equipment manufacturers make improvements and add complexity to the vehicles,” Tom states.

“That is why a number of years ago at Aim we restructured the maintenance department and formed a specific department dedicated to training. This department, under the direction of Ken Singleton, Aim Director of Operations, and Chris DiSantis, Director of Training, keeps our technicians up to date and is responsible for the apprenticeship program.”

The NationaLease Tech Challenge produced many wins for Aim technicians. Approximately 150 NationaLease companies entered one technician from each of nine regions across the United States and Canada. Aim entered technicians in five of those regions and three won their regions.

I would personally like to congratulate Todd Gansert of the Cleveland branch and Doug Shrader fo the Phoenix branch on their regional victories, and especially Robert Mrzyglod for winning the entire contest.

Robert Mryzglod and Rich Ramsey each scored among the top three in the event, leading Aim to a team regional championship. Robert was the overall winner, defending his title from 2012. Rich, in the event for the first time secured third place.